It’s better to learn the process than to leave
valuable information in a foreign state.

I’m involved in a New Hampshire family law case. My opponent left New Hampshire and went to Virginia. As a result of the move, there is valuable and relevant evidence in the State
of Virginia.

How can I get the Virginia evidence and bring it back to New Hampshire?

To answer this question, let’s start with reversing the roles. Let’s say there was a Virginia case and a Virginia attorney wanted to get information that is within the State of New Hampshire. Would New Hampshire allow such a thing? The answer is a resounding “yes.” New Hampshire has adopted the “Uniform Foreign Depositions Law.”

This statute can be found at RSA 517:1. In essence, it says that whenever a court of record in a foreign state issues a mandate, writ or commission or whenever upon notice or agreement it is required to take the testimony of a witness or witnesses in this state, witnesses may be compelled to appear andtestify in the same manner and by the same process and proceeding as may be employed for the purpose of taking testimony in proceedings pending in this state. In other words, if a Virginia court says that there is evidence in New Hampshire that is needed in Virginia and the Virginia court tells a New Hampshire court by appointing a commissioner to take depositions or sends a letter called “letters rogatory”, then the New Hampshire court will honor the request and issue a New Hampshire subpoena requiring the witness or witnesses to appear to be deposed (i.e., to
give a deposition or produce records).

This process can also happen if the Virginia attorneys
agree to take a New Hampshire deposition and give notice to the New Hampshire court that such a foreign deposition is required.
It is unlikely that every state subscribes to the Uniform Foreign Depositions Law.

In Virginia’s case, for example, they have adopted the Uniform Interstate Deposition & Discovery Act. This law applies to depositions, requests for the production of documents and inspection of premises requested by an out-of-state court which will be served on a person or entity in Virginia.

So, what will I need to get the Virginia evidence, other than travel to Virginia? Here is a
list:

2. A Virginia State Foreign Subpoena Form – you can find one on line;

3. A written statement that New Hampshire will afford the same privileges to Virginia
attorneys – we know that it will;

5. A statement indicating whether the subpoena will be served by a Sheriff or a process
server;

6. If you don’t want to comply with items 1-5, you can start a miscellaneous case in Virginia, pay an entry fee, and ask the Virginia court for assistance.

In some instances, a New Hampshire court will appoint you a Commissioner to take the Depositions in Virginia. In other instances, you can get the Court to sign a letter (with standard
language). This letter is called Letters Rogatory.

When such a commission is made or letters rogatory are signed, you have to send two certified copies of these documents to Virginia.

Note: if you are looking for medical records, Virginia requires a “Notice to Provider” as part of the package.

The process is involved but understandable.

Again, it’s better to learn the process than to leave
valuable information in a foreign state. 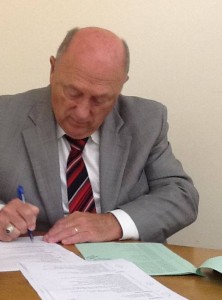